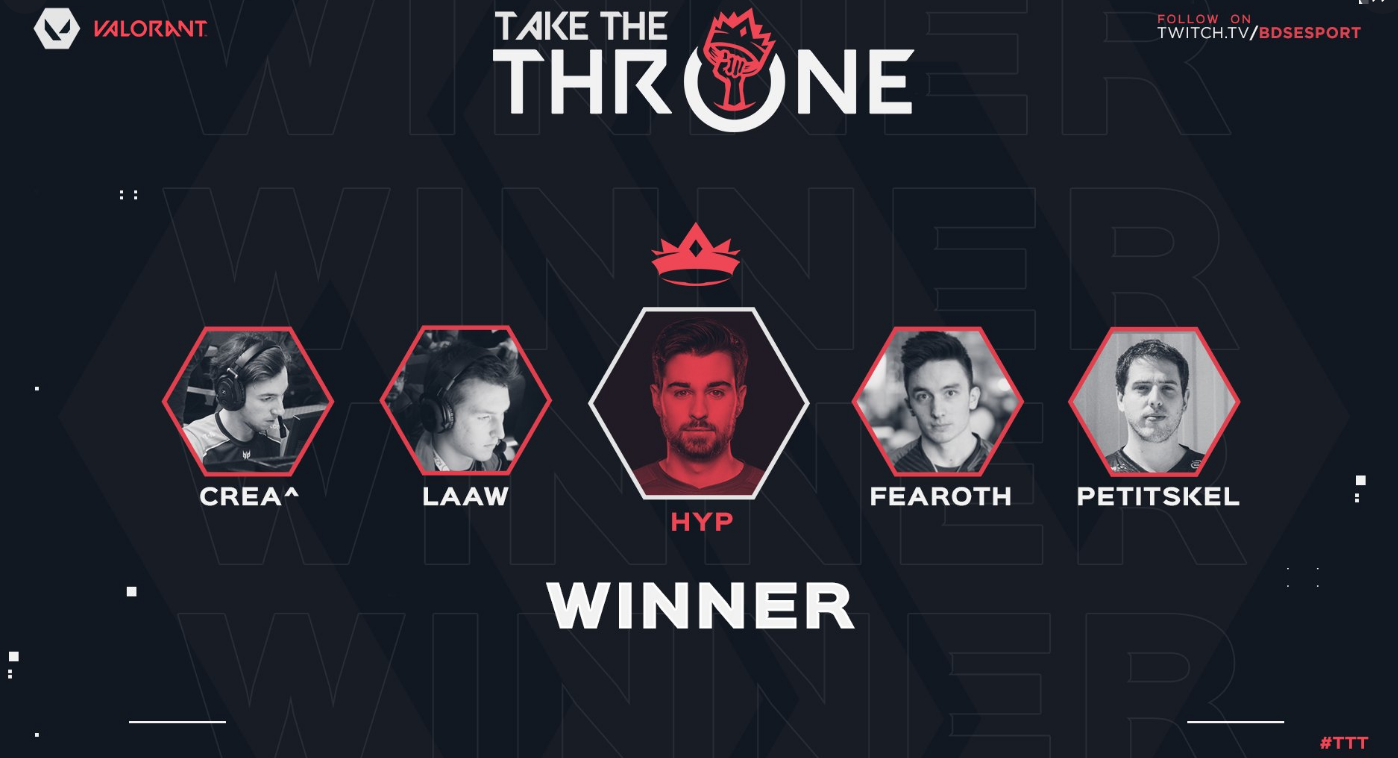 Sixth iteration of Take The Throne has come to an end with an upset. The French HypHypHyp led by Damien “HyP” Souville, have dethroned fish123 with a clean 2-0 score in the best-of-three finale in the event.

fish123’s reign comes to an end

The British medley have been the reigning champions of Take The Throne for three iterations of the event after beating Prodigy at Take The Throne #3. Hyp’s team have ruined Adam “ec1s” Eccles’ team ambitions to remain the champions for the fourth time in a row at the event.

Fish123 came into the event with Adil “ScreaM” Benriltom, who took place of Ardis “ardiis” Svarenieks, after the Latvian has departed the team.

HypHypHyp’s campaign set out on Split, where a tight game ensued. Scream (Screamy) set the tone early by playing the new agent Reyna, taking fights and getting entry frags, effectively disrupting the French team’s rhythm. That wasn’t enough, however, as James “Kryptix” Affleck and co. failed to capitalize on Scream’s form. Hyp’s retakes and bombsite execution was fantastic, and the team eventually managed to slip by with a win at 13-11.

Map two took us to Bind, where an initial fish123 lead of 4-0 was short-lived as HypHypHyp boys were quick to recuperate and find their drive once again. Excellent bombsite defense saw fish123 being repented by the French squad, while on defense, the British medley failed to stop bomb plants or either got out-fragged by the challengers. This ultimately led to Bind going all in favor of HypHypHyp at a disappointing 13-8 for the French. Yet again, we saw Scream top fish123’s table. However, that was once more not enough for the team to pull back the score in their own favor.

In the end, the best-of-three series went in favor of HypHypHyp, with the French challengers becoming the new kings of Take The Throne. Now the question stands, how long can they hold on to the throne.

For more news and guides on Valorant, follow us at Run it Back.